Assistant Professor Manuel González Canché was named the recipient of the 2016 Promising Scholar/Early Career Award from the Association for the Study of Higher Education. He was honored at an awards luncheon on Nov. 11 during the 2016 national ASHE conference in Columbus, Ohio.

Manuel González Canché, an assistant professor in the University of Georgia’s Institute of Higher Education, has been named the recipient of the 2016 Promising Scholar/Early Career Award from the Association for the Study of Higher Education.

The Promising Scholar/Early Career Award is given for a significant body of scholarship or a single extraordinary research achievement by a higher education scholar, and in recognition of potential for future research. This award may also call attention to significant work in progress that has won praise from senior colleagues and support from foundations or government agencies. The Early Career Award is reserved for individuals who are no more than six years beyond the receipt of the doctoral degree.

González Canché joined the faculty of the Institute of Higher Education in August 2012, immediately after earning his doctorate from the Center for the Study of Higher Education at the University of Arizona. He also holds a bachelor’s degree in educational research and a master’s degree in higher education and quantitative methods from esteemed universities in Mexico, his home country.

His research follows two different, yet interconnected paths. The first can be broadly classified into issues of access, persistence and success, with emphasis on institutional sector effects on students’ outcomes. The second focuses on higher education finance, with emphasis on spatial modeling and student college choice and migration.

As a first-generation college student and graduate himself, González Canché has a special research interest in factors and policies enhancing underrepresented students’ opportunities for educational success. His findings challenge traditional ideas about the negative impacts of community college enrollment on subsequent educational attainments.

“Dr. González Canché is an innovative researcher whose stature in the field is rapidly rising,” said Libby Morris, director of UGA’s Institute of Higher Education. “For too long, scholarship on higher education has worked under questionable assumptions regarding the effects and outcomes of community colleges as well as the lack of influence of geographic location on the effective implementation of policies and initiatives on student outcomes. Dr. González Canché has become prominent among a small group of methodologically and conceptually strong scholars deepening our understanding of these influences.”

Columns online newspaper announces the award to the UGA community. 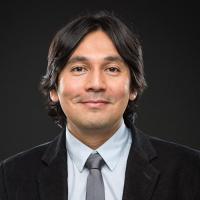